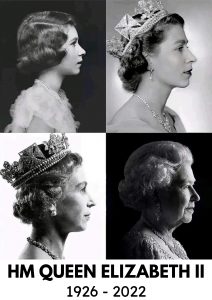 We join the nation in our sadness over the loss of our Queen. Please see below a message from Thurrock Council and Thurrock’s mayor which also gives details of where residents can lay flowers and sign the book of condolences.

Our Mayor of Thurrock, Cllr James Halden said: “I offer my sincere and heartfelt condolences to the royal family on behalf of the whole Thurrock community at this difficult time.

“Millions of families, like mine, would have experienced the most profound pause yesterday as we waited for news. This pause would become great grief. However, it is my believe that this grief will yield for gratitude, thankfulness and joy for the life of the greatest Head of State.

“Many of our older residents may remember Her Majesty’s visit to Tilbury, Chadwell St Mary, West Thurrock and East Tilbury following the flooding in the borough in 1953. This created a wonderful morale boost at a very challenging time for our communities.

“In 2012, over 30 street parties took place in the borough to celebrate Her Majesty’s Diamond Jubilee. And earlier this year, our communities took part in many celebratory Platinum Jubilee activities, including lighting beacons, opening a new footbridge bridge and members of our community being a part of the official Jubilee Pageant in London.”

The Mayor will be sending a letter of condolence to His Majesty The King on behalf of the Members and officers of the council and the people of Thurrock.

During the mourning period, flags will be flown at half-mast at the Civic Offices, Grays, at Tilbury Civic Square and at Coalhouse Fort.
A Book of Condolence will be opened in the Civic Offices in Grays as of 10am today, Friday 9th September, for residents and members of #TeamThurrock who wish to express their sympathies.

Floral tributes to HM The Queen may be left at the Grays Park Memorial, in Grays Town Park or you may wish to make a donation to a charity of your own choice or to one of the Charities of which Her Majesty was a patron.

There is more information on the council’s website at www.thurrock.gov.uk/her-majesty-queen-elizabeth-II which will be updated as further information is confirmed, including details of an online book of condolence.
Full official announcements from Buckingham Palace are provided at royal.uk.